THE SPIRO-MADE FACSIMILES NEVER EXISTED. THE END OF A MYTH (I)

When I started some years ago my research on the Spanish forger Plácido Ramón de Torres (1847-1918), I came from time to time across with a document related to the Spiro brothers of Hamburg. Analysing later the Spud Papers, I came in touch with a lot of “Spiro-forgeries”. I had to learn, however, that 20-30% of the counterfeits presented in this work, supposedly dedicated to the Hamburg-facsimiles, were the work of “my forger”.[1] Looking for evidence about the generally admitted selling of some of those facsimiles by the Swiss forger François Fournier, active between 1905 and 1917, I had to learn a further lection, that a lot of the supposed “Spiro”-sheets Fournier had sold, were by no means Spiro-products.[2]

Despite the arisen doubts and the questions those results had left unresolved, I could not imagine I’d someday assert and defend what the title of this article announces and what most of the readers of these lines will, at least at this moment, consider in benevolent terms a strange, weird or insane idea. This is the third article in the context of this new research. And although the point of departure in comparison with the two previous articles has changed and the basic premises for both articles turned out to be obsolete, strangely and fortunately, the results are not affected and the conclusions are still valid.

I could not find in the philatelic literature consulted any systematic attempt to approach the history of the business of the Spiro brothers and their supposed philatelic products. In 2019 Mr. Wolfgang Maassen initiated a new project, aimed to discover more about the Spiro family and their activities in the field of philately. He generously invited me to join his efforts. So, when we first approached the Spiro-problem seriously together, we took the supposed “Spiro-sheets” as reference, as most others would have done as well: a great error, as we had to learn, because there’s no real evidence about their origins, all is supposition and telling.  The Spud-Papers, written by three of the pioneers of the British philately, were another reference that could reveal some strange things. But it could not lead us to the sources, because their publishing started nearly ten years after the initial events. 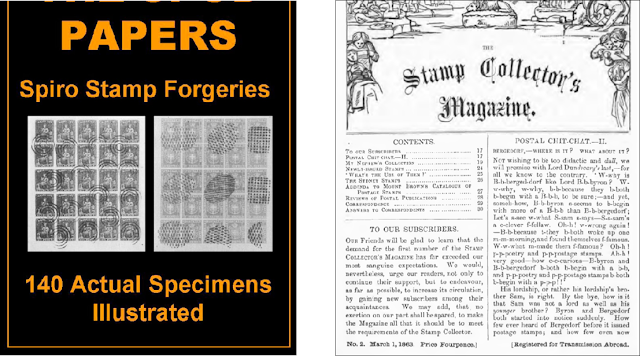 A source much closer to the philatelic beginnings of the Spiros and their activities is E. L. Pemberton’s article on the facsimiles sold by the Hamburg brothers, published in 1864 in the Stamp Collector’s Magazine.[3] Despite their assertions, they had not been the makers, but only the resellers of those items, Pemberton only admitted, they did not really want to deceive collectors labelling their products expressly as facsimiles. The weightiness of his verdict and the meagre substance of his descriptions of some of those items made it quite difficult to hold a different opinion or to discover contradictions.

The possibilities of modern communication via the internet, the during the time of our research downloadable documents of the Crawford Library or the documents available on the French web-site Memoires de la philatélie created a new platform for researchers that allowed a closer approach to nearly all still existing documents of those years when stamp collecting began to establish as a respected middle class hobby.[4] The lucky collaboration and exchange of documents and information with Wolfgang Maassen led finally to surprising findings, earlier researches hardly could have made. 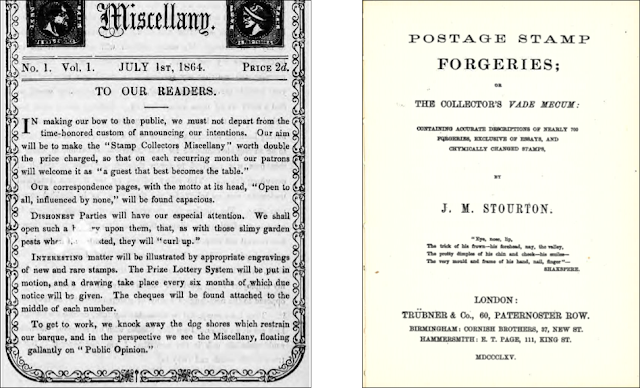 We analysed digitalized newspapers of the 1860’s mainly from Germany and the UK, all available philatelic magazines and catalogues. The same we did with the works about forgeries, specially the very early ones.[5]  We contrasted, whenever possible, the information with other non-philatelic sources of the corresponding local archives.

What at the beginning seemed to be an audacious working hypothesis turned out to be reality in its central point. The Spiro brothers did not make nor ordered to make facsimiles of stamps, but they only resold those items. A considerable part of what we nowadays consider Spiro-made facsimiles is by no means the material they had sold and that could be acquired in the middle of the 1860’s on the European philatelic market.

In order to prove those assertions, I’ll first try to describe shortly the state of philately in the early 1860’s. That includes a short look at the philatelic market and the stamp forgeries. This will give us an idea of the historical frame we are moving in. Then I’ll present some of the forgeries of those years, identified through their repeated descriptions. Some of those safely identified mid 1860’s forgeries will be exemplarily compared with supposed entire “Spiro-sheet” samples. The obtained results will serve as evidence for the initially made assertion about the Spiros.