THE SPIRO-MADE FACSIMILES NEVER EXISTED. THE END OF A MYTH (II)

When in 1840 in England and about 10 years later in most of the European countries adhesive stamps were introduced as a medium for prepaying mail, nobody could foretell, that collecting those items would be one of the new hobbies of the century. In the early 1860 the word “philately” was not yet invented or in use, most people spoke of “timbrology”.[1] The first stamp dealers like Stanley Gibbons (1856) in England or Jean-Baptiste Moens (1858) on the continent started selling the stamps as an additional product of their array.

“The commencement of the Mania” (Perris) could be noticed through the increasing interest in stamp collecting, reflected in a quickly growing demand for stamps, not only in the UK, but also in Central Europe (Belgium, France, the Netherlands and Germany) at the same time. This demand for stamps from all over the world originated the need for basic information about them. And this fostered in turn the publication of philatelic magazines, catalogues stamp albums and books. Other magazines devoted to other fields of leisure as the Parisian Magazin Pittoresque, the German Der Bazar and the British Every Boy’s Magazine began to include as well sections dedicated to the new hobby. The huge number of advertisements of dealers in the specialized magazines is a good indicator for the dynamics of this new promising market in the following years.

Forging has a long tradition. The forgery of money and documents is known from ancient cultures and did not cease in the European middle ages. In dossiers previous to the introduction of the first adhesive stamps for postal use in England, experts had warned, that there would appear counterfeits to defraud the postal administration. They, certainly, recommended the sovereign’s effigy for the stamps, anticipating later scientific discoveries, that the human eye was able to discover even minute changes in facial expressions. They could not imagine that 20 years later philatelic forgers had outnumbered the deceivers of the postal system.

Until the beginning of the 1860’s there are no advertisements of stamps nor in the local, nor the regional or country-wide distributed newspapers. There were about half a dozen stamp dealers established all over Europe, let’s say as part-time-dealers. They were librarians, antiquarians or practised a similar profession and the stamps were an additional occupation and income. So, for stamps there obviously existed only a very limited market, with even less, very few profitable possibilities to place forgeries.

During the following years we witness a boom of the demand of stamps because of the quickly increasing popularity of this new hobby. In a synergetic feed-back the coming into being of the first price-lists, catalogues and stamp magazines occurred all over Europe. Most magazines included sections where stamp dealers published their offers. It was not only a Europe-wide expansion, it even included North America. And now, under those new constellations, forgeries had a real chance to sell. The best proof for this assertion is, that among the very first books on philatelic subjects were various booklets just about forgeries.

The major part of the counterfeits listed by Jean-Baptiste Moens in his 1862 book on forgeries were essays, that were obviously taken by many dealers and collectors for genuine issued stamps. Nearly the whole rest refers to chemically manipulated authentic stamps that showed changed colours after their treatment.

But soon the emerging of hand-drawn, usually lithographic imitations started. Articles or books about forgeries published in the following years show an increasing number of lithographic imitations. Today we wonder how collectors could be deceived by the majority of those fakes we would describe from our modern point of view as naïve or very crude. But we have to take in account, that most collectors and even many dealers sold samples they had never seen before, without any possibility to verify whether they were really genuine or not.

This changed in the following years as far as the newly issued stamps were concerned with the publication of the first illustrated stamp magazines that dedicated a lot of space to the presentation of novelties. The real design of the earlier issues could only be verified with the help of the illustrations of the first catalogues, since 1863 when J.-B. Moens had edited 17 deliveries of lithographic sheets of about 630 stamps, in 1864 bound together with his first catalogue, shortly afterwards translated by Charles Viner and published with the title Illustrated Postage Stamps in England. Although covering with lithographs of a superb graphical quality about 20% of the existing stamps at that time, this work was out of bounds of most collectors. It, certainly, depicted the private collection of its editor and part of one of his friends and, as the British expert Pemberton could show few months after its publication, by no means all images represented genuine samples.[2] Stafford Smith had started with 50 images in 1864. In his 1866 Sixpenny Illustrated Catalogue of Postage Stamps the number of images had doubled. In view of this reduced number of available stamp-images forgers could deliver imitations that most collectors only might have been able to classify as forgeries by intuition. 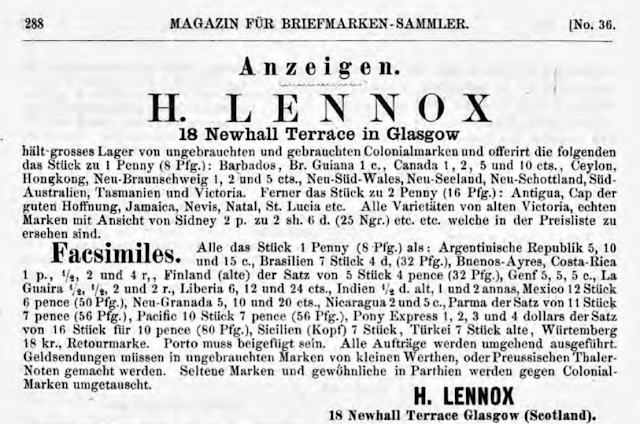 The rapidly increasing demand of stamps generated the phenomenon of the “Spiro”-facsimiles, stamps and series of about 40 countries or regions appeared on the philatelic market, offered and sold among others by the Hamburg brothers as imitations and at very competitive prices. Expressly announced as fac-similes, there were not thought to deceive the buyers. On the contrary, there were hyped as an alternative economical option, to fill the gaps expensive stamps had left in the collections. About half a dozen contemporaneous books or series of articles allow to identify part of those old forgeries out of the pool of known forged items.[3]

[2] An own analysis focused on Spanish stamps could discover more copied fakes.

[3] The best “pool” of images is, in my opinion, the Evert Klaseboer CD-ROM Catalogue. The used reference books have already been quoted.