THE SPIRO-MADE FACSIMILES NEVER EXISTED. THE END OF A MYTH (III)

Which are really the stamps the Spiro brothers sold? We’ve only two, but sure sources to determine those item. The first is the 1864 selling list of the Spiros, the second is a listing made by E. L. Pemberton in an article in the Stamp Collectors Magazine.[1] In a letter to the editor the Hamburg firm ratified the listing, exceptuating expressly one only stamp.[2] 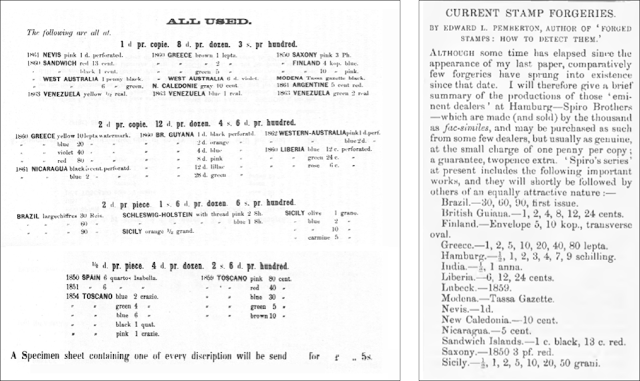 Except for one, the works we rely on in order to identify the facsimiles advertised by the Spiro brothers are the previously quoted books and articles about forgeries published between 1863 and August 1865.[3] Moens’ contribution is, unfortunately, not specific enough in its descriptions of the fakes to be useful.

In their selling-list the Spiros offered 53 facsimiles of 18 different countries or regions.[4] Despite my attempts to identify those samples out of the pool of the described and documented forgeries, I was not able to find the meant samples of the two stamps of Spain (6 cts. of 1850 and 1851) and those of the British Guiana issue of 1860. Their descriptions are not specific enough. As far as Brazil is concerned, I could not find the described forgery of its first issue either. In three cases (Sicily, Tuscany and Nicaragua) the descriptions point to two possible candidates.

For 13 out of the 15 discovered and identified different facsimile-types sold by the Spiros exist supposed entire “Spiro-sheets”, multiples or single values with “typical Spiro-cancels”. For Brazil, with its not identified forgery, even exist two supposed sheets. For Greece only exist some suspicions and for the rest (New Caledonia and Argentina) no supposed “Spiro-sheet” or stamps have been documented or attributed. None of those 13 supposedly Spiro-made sheets or stamps coincides with any of those of the Hamburg brothers’ list. I’ll show that now by means of six examples.

Following the publications of experts in Brazilian forgeries, of the first issue exist two types of “Spiro-sheets”.[5] In a recently published article one of them could, however, be identified because of its typical cancel as the work of Torres.[6] To prevent possible objections I’ll nevertheless take it in consideration here. 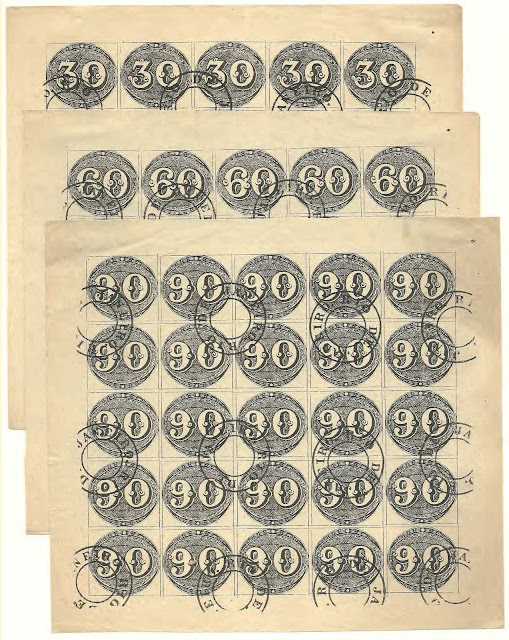 Smudged dots instead of a clear engine turning pattern of the background distinguish this “badly imitated” early Brazil forgery from the original.[7] The images taken from each of the two sheets qualified by Studart as Spiro-sheets, do not match with that description. 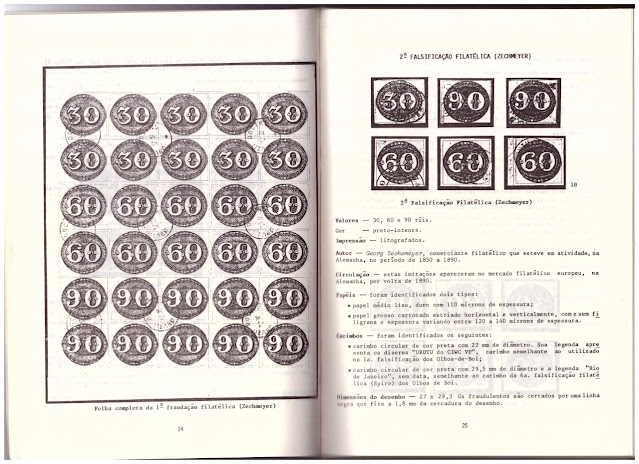 A final note furthermore points out that the “size of the forgeries is a trifle larger than the originals”. Among the up to five forgeries presented in the third edition of the Album Weeds in 1905, there’s any mention of such an eye-catching difference in size. Only Studart presents in 1995 among his 24 individually measured forgeries a sample that might be the meant, if we only look at its peculiarly larger size (31,5 x 36,5 mm). He describes, however, this not at all smudged sample as a proof that appeared about 1940 on the philatelic market. So we’ll have to exclude it from the list of possible candidates and admit that the described 1860-forgery is one of the once exiting, lost and/or no more found samples. 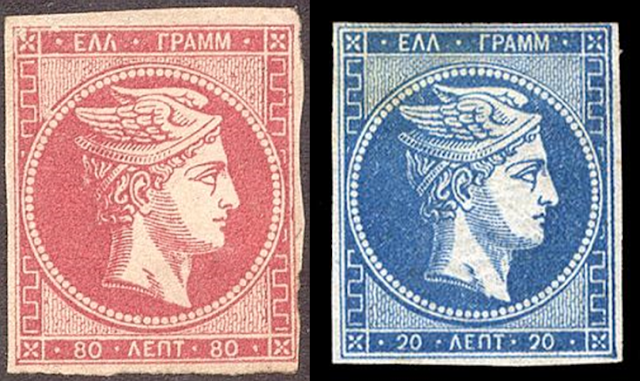 Listed and/or described by all our referenced authors, the number of dots or pearls around the central medallion of this forgery is 75 and not 88 as in the original. This fact allows an undisputable identification. No other documented forgery presents this feature. 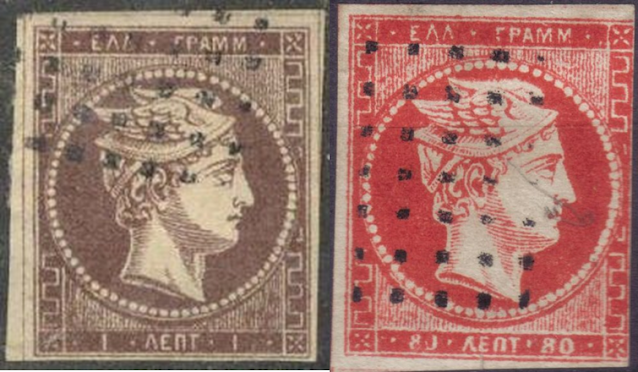 Of this issue there’s no Spiro-sheet or sample documented. Klaseboer classifies in his catalogue another forgery as a possibly Spiro-made (figs. 21 and 22). The samples, however, do not show what we would consider a typical Spiro-cancel. The printing quality and the graphic achievement do not correspond with what we would expect from a “Spiro-facsimile”. 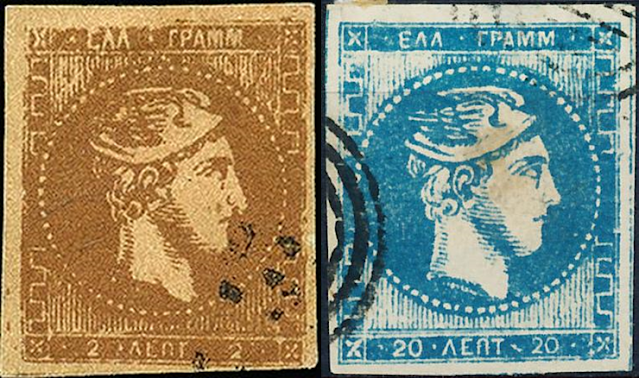 The letters of the inscription of this fake are unreasonably large. The background is very indistinct, so that of the mineral spring in the background there are only a few red strokes being visible. That’s the summary of the description of this Nevis-forgery. The images of the actual existing supposed “Spiro”-samples contrast clearly with those of figure 25 most people would accept as genuine Hamburg products. I think there’s no need for further explanation, the images speak for themselves.

[4] See the Lowell Ragatz edition of the Spud Papers, Lucerne 1951.