This fascinating Panama origin letter (figure 1) would have been difficult, if not impossible, to understand several years ago. But with the growing volume of research in the early stamp-issuing period of Mexico, many puzzles can now be solved. This is one of them. 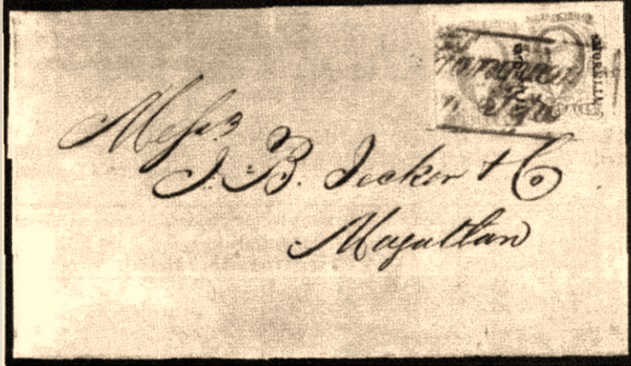 This letter originated from a port on the Pacific side of Panama (figure 2), as noted by the docketing endorsement, on February 13, 1858. The letter was carried out of the mails, most likely by the captain of the ship, as a favor to the merchant. He may have received some compensation for the courtesy, but exactly what remains uncertain. The next bit of evidence indicates that the letter passed through two forwarding agents (figure 3). The first of these was Oetling and Company in Colima who placed their cachet on the letter and then forwarded the letter to their friend-agent in Tepic, Ausperg Reike, after franking the letter with a one and two reales (Morelia district) 1856 issue stamps. One can assume the letter carried some shipping documents or samples which added the extra weight and necessitated the additional one real postage. An important agent such as the Oetling firm would not consider having his counterpart frank the letter! The letter was received by the firm of Ausperg Reike in Tepic who also placed his merchant's cachet on the letter and then delivered it to the Mexican post office which applied the "Franqueado en Tepic" cancellatioin. Thus, the letter has stamps used out-of-district. The postal service carried the letter to its destination, Mazatlan, and the German merchant, J. B. Jecker. 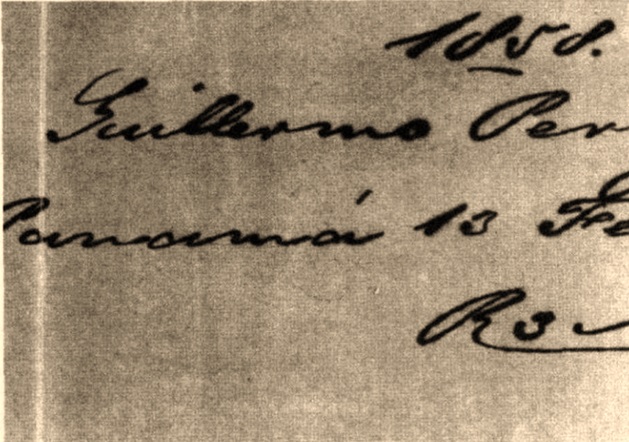 The double forwarding is rare and inusual, but how does one understand the routing? It is well known that ships of the Pacific Mail Steamship Company regularly made trips from Panama to San Francisco via Mazatlan. So why did the letter receive the routing it did? The answer is provided by a letter sent by the agents of the Pacific Mail Steampship Company, Farber and Babcock, to the firm of Oetling and Company dated April 16, 1857: 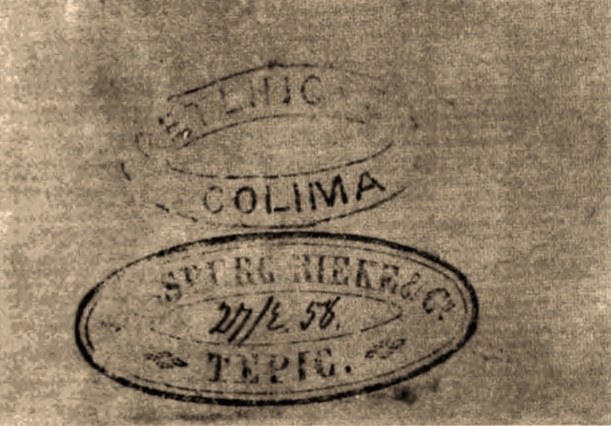 Enclosed we beg leave to hand you a letter of introduction from Msr. Bghed & Lemmen of this city, to yourselves, from which you will perceive, the Steamers of the Pacific Mail Steamship Co. propose touching at Manzanillo, once each month, both on their voyages from Panama and San Francisco.

We presume this arrangement will be most desirable to you, as it will prevent your treasures for either place remaining long at Manzanillo. We have sent your ships agent Mr. H. Ohlmeyer ... B/Logs both for Panama and this Port which he can have filled up and in readiness for each steamer on her arrival.

Our charge for freight will be one and a quarter per ounce primage either to this Port or Panama, which we trust may prove satisfactory.

You will at once perceive should we receive sufficient inducement to continue the proposed arrangements how many facilities we shall afford your city and the Port of Manzanillo and trusting you will lend your good name and influence to aid us generally and in particular in obtaining treasures. We remain very respectful.

Forbes & Babcock
Agents of the P.M.A.

This letter tells us that once a month the steamship would stop at Manzanillo, rather than at Mazatlan, on its way to San Francisco. Why Manzanillo? Probably because once a month there was enough merchandise to be picked up in Manzanillo. The other three stops a month were to be a Mazatlan, a much larger and more important port.

To my knowledge, only two Panama origin letters are known with the 1856 issue.

My thanks to Karl Schimmer who provided me with the Farber and Babcock letter and to Lois Deutschman who translated it.