THE SPIRO-MADE FACSIMILES NEVER EXISTED. THE END OF A MYTH (IV)

The descriptions of the Saxony-forgery on the philatelic market in those years, furnish easily comprehensible and unmistakeable details for its detection. A white shading line or space all around the central figure already determines a unique sample. The inner ornaments of the figure, consisting of strangely vermiculated lines instead of a lot of small figures (three) in different positions and orientations, do not touch the figure’s outline. There’s no full stop after FRANCO. These are more than sufficient details to identify the forgery without the least doubt. No possibly corresponding “Spiro-sheet” or “typically” cancelled item is reported or documented.

Three different forgeries coincide with the descriptions of the early forgery experts. The “worst” could not be localised, but is impossible to fail, should it (re-)appear. Its left and right lateral labels’ inscriptions are transposed.

The two other copies show both a solid background, whereas we find fine crossed lines in the originals. In the first forgery the 1 gr and 50 gr show the red same colour. There’s no dot after SICILIA. For the value with the most eye-catching difference I could, unfortunately, not find any sample. The lowest value (½) shows a vertical stroke separating the numerals of the value.

Samples of an old forged issue

Samples of another old forged issue

Entire “Spiro-sheets” of this issue are not known, but some samples bear “typical” cancels we use to attribute to the Spiro brothers. The network of background-lines distinguishes them, however, from our old forgeries.

All consulted forgery descriptions, except for Stourton, coincide in the most important, unique and unmistakeable sign that distinguishes these two slightly different types of counterfeited 1864/5 stamps from the originals as well as from later forgeries. The background consists of straggling dots. It is clear that they are as well different from those that are usually considered as (made and) sold by the Hamburg brothers we can find e.g. in the Dunne collection on the internet.[1]

Stourton who publishes his book in August 1865 includes in his descriptions some new Western Australian forgeries of the 1865/69 issue with different colours. These new forgeries could not yet have existed in October 1864, when the Spiro-list was published. So we need not take them in account.

Two different old forgeries (straggling dots) and "Spiro"-forgery Spud Papers (right)
Two Torres-forgeries can be found in the pool of not attributed old forgeries (fig. 45 and 46). The first is a joke [“V” instead of “W”], the second a copy taken from an actual existing sample with the inverted horizontal labels.

The result of the above presented comparing analysis is, that there is no coincidence between the described mid-1860’s forgeries, identified as real Spiro-products and the stamps or sheets generally thought to be sold by the Hamburg brothers. Nor coincide the applied cancels with those we had expected to find after having analysed nearly 250 documented, supposed entire “Spiro”-sheets, nor coincide the designs. The printing quality and the quality of the design of those old forgeries are mostly poorer than on the “Spiros”. 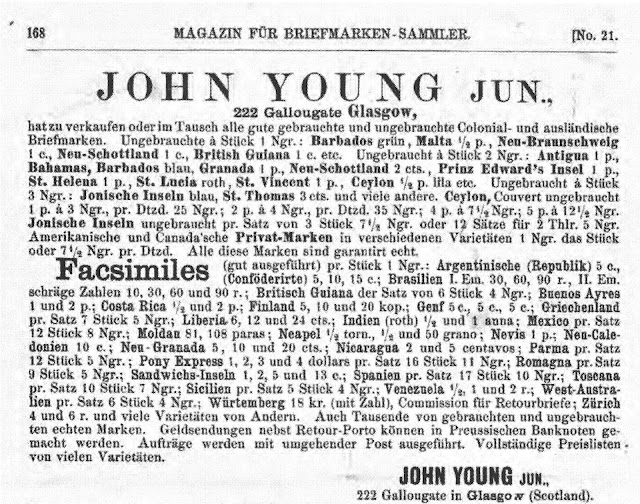 Now that it is clear, which were the products the Hamburg brothers offered and sold, I have to admit, that I did not yet demonstrate that they did not produce them. This is a secondary problem in this context and will be treated by Wolfgang Maassen in his part of the current research that is about to be published.[2] But let me nevertheless anticipate his and my “They did not”.

The Spiros not only affirmed repeatedly, that they had got “their” fac-similes from England. They even published, if only during three months, an own gratis philatelic review, renouncing to any own advertisement, but defending explicitly the boon of selling facsimiles. They considered their furnishing of such copies an honourable piece of work and a unique opportunity for the small pockets of many collectors to get a representative gap-filler for vacant cases in their collections. About 50 years later François Fournier would argue in the same way in his review Le Facsimile, obviously inspired in the Hamburg publication. No need to tell a different story. 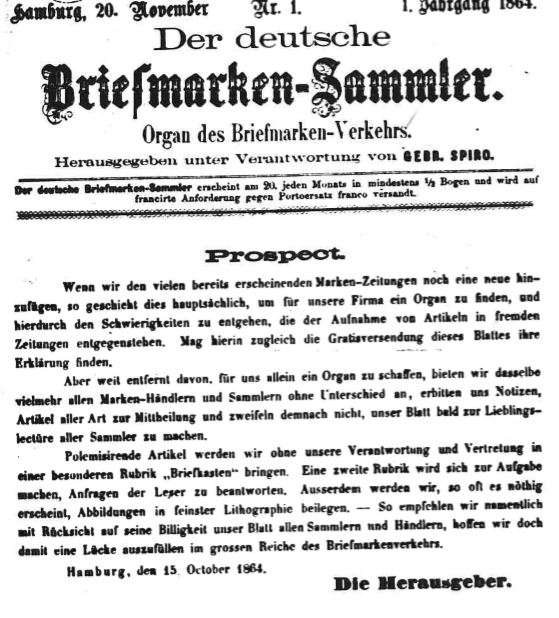 And let me finish with a “philatelic” reason to resolve this question. In “parallel” offers the Glasgow-sited firms Young, later Weir and Lennox started their appearance on the philatelic market in 1865, advertising expressly facsimiles as the Spiros did as well.[3] In his advertisements Young did not only offer the same stamps as the Spiros, but issues of another 21 countries. A similarly augmented offer show the ads of Weir. This does by no means go with an alleged Spiro origin of those items.

We understand this article as a first step in our more ambitious project that pretends to identify, if possible, the makers of the analysed mid-1860’s forgeries. More intriguing than the just mentioned question is another one we try to resolve in a further step. Who has made those other erroneously named Spiros, those quite acceptable lithographic forgeries we find sometimes on entire 5x5 sheets and that bear those emblematic cancels we are used to identify up to now as German products?

At this moment there are more speculations in the air than tangible evidence. Our theory and working hypothesis is the following. With the end of the first wave of “timbromania” and the saturation of the stamp market in 1866/67 the “pre-catalogue” era with its relatively poor and crude forgeries came as well to an end. In the early 1870’s the Florentine gang started a new initiative invading the market with their forgeries produced by Torres and Usigli.[4] The 20 first forgeries the Spud Papers describe and attribute to the Spiros, were in reality nearly all Italian-made and can be distinguished from their new “Spiro”-competitors by their different cancels. The success of this initiative animated others to do the same originating a new wave of forgeries.

What I just called new “Spiros” probably came from at least two sources that produced quite well designed and achieved forgeries. One was located in Hamburg, another one somewhere in England. We hope to be able to discover and present soon more detailed information about all those forgeries and their authors.

Acknowldgements: My thanks are for Wolfgang Maassen, who generously included me in his investigations about the Spiro-family. Evert Klaseboer, author of the CD-ROM-Catalogue, gave me permission to use his photos for publication.