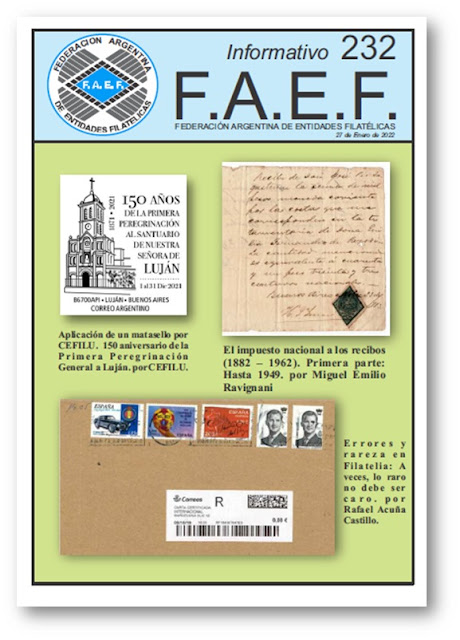 Critical research over the last few years into forgeries of classic stamps worldwide has brought about some quite surprising results. It calls into question some seemingly inalterable truths related to what we still call the “Spiros.” The role of Hamburg merchants in the selling of stamp facsimiles and their purported production now has to be revised[1]. We’ll have to reconsider as well the importance of the so-called Spud Papers as a kind of handbook to identify supposedly Spiromade forgeries (Figure 1)[2].

Nearly unknown Spanish forger Plácido Ramón de Torres (1847-1918) [Figure 2] was not only the author of hundreds of stamp illustrations[3], he was also responsible for counterfeits of classic stamps worldwide[4]. He collaborated with Swiss forger François Fournier, active from 1904-1905 until his death in 1917[5]. The role that Torres and his patron Elia Carlo Usigli (1812-1894) played in early forgery production and their European distribution has only been partly described[6]. I believe we have to dismiss some beloved convictions in this context. The following article is one of the steps in that direction as far as the Bahamas are concerned.

Publications from the 1860s do not mention forgeries of Bahamas stamps. Counterfeits of the 1/- value of the 1862 issue are mentioned for the first in 1876. Nearly all issues of the journal between 1870 and 1876 contained a section called “Spud Papers,” with articles where British philatelic experts W. Dudley Atlee, Edward L. Pemberton and Robert B. Earée compared descriptions of genuine and forged stamps[7]. Copies of counterfeits were affixed to the corresponding pages in order to allow the reader a direct comparison (Figure 3).

The article was reprinted in the first compilation of those studies, published in 1881 with the title The Spud Papers An Illustrated Descriptive Catalog of Early Philatelic Forgeries. Under the renamed title Album Weeds (Figure 4) the publication saw three new, revised, reorganized and augmented editions in 1882, 1892 and 1905 under the direction of R. B. Earée.

The information remained unchanged until the third edition in 1905. Only one new forgery was then added to the list. It is a second fake of the 4p value of 1861. This newcomer is described as a variety that appeared in the market about 1890 (Figure 5).

In reality, 1900 should be the limit to speak of early forgeries. But as many people affirm that the Swiss éditeur d’art François Fournier offered some of the corresponding “Spiro” forgeries, we’ll have as well to take into account some copies, possibly made by him or ordered by him and made by Oneglia.

More recent approaches to forgeries are those of Evert Klaseboer in his CD-ROM Catalogue and Morten Munck on his website[8]. The Oneglia biography of Lowe and Walske is quoted, but I’m not sure they really took it into account[9]. The presentations are based on the previously quoted works, but also Al Branston’s BWISC Bulletin article that mainly confirms the conclusions of some of his published contributions. Peter Fernbank’s Bahamas book[10] only presents the Spiro forgeries identified by their whole sheets and the Oneglia forgeries of the 1p and 1/-[11]. I believe Branston’s presentation of the forgeries contains some inaccuracies. I suggest a classification of the forgeries in six different types, corresponding each type to a different forger.

[1] The Spiro-made Facsimilies Never Existed, the End of a Myth. See http://actualidadfilatelica.blogspot.com/2020/08/the-spiro-made-facsilimiesnever-existed.html.

[2] The Spud Papers’ errors. The Confusion of the British Experts,” Australian Journal of Philately, n.d. 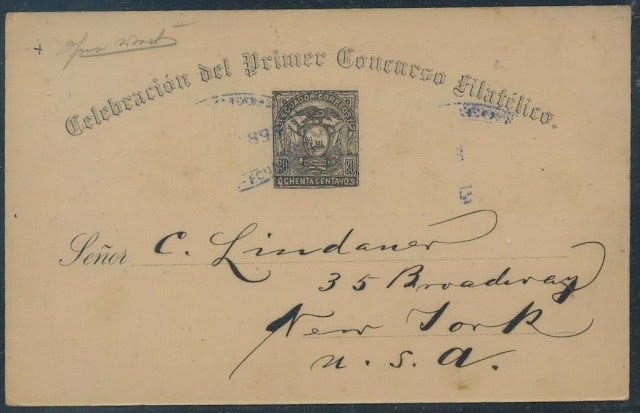 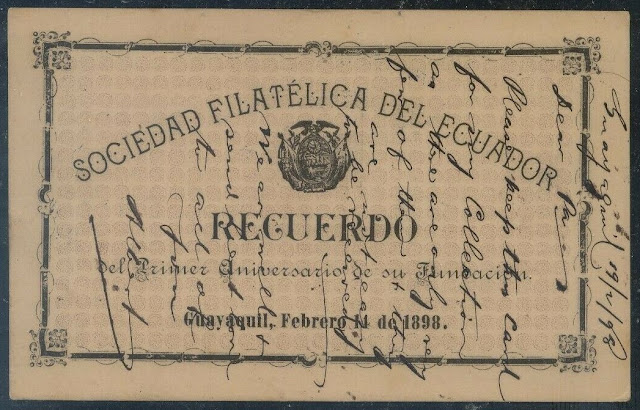 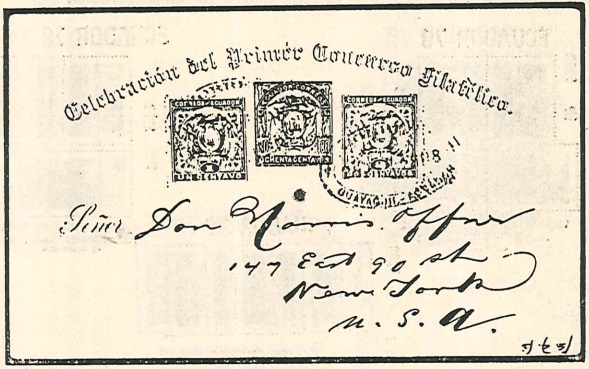 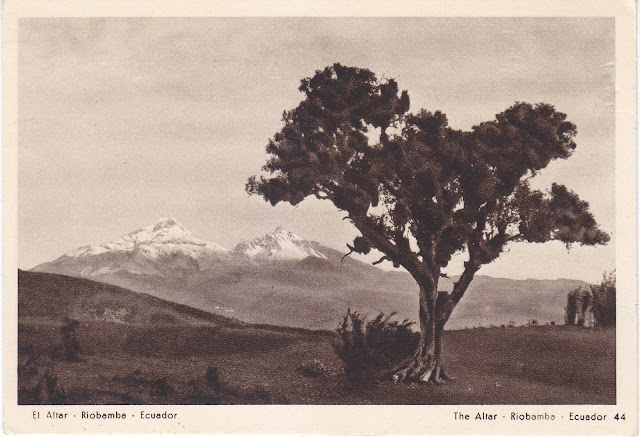 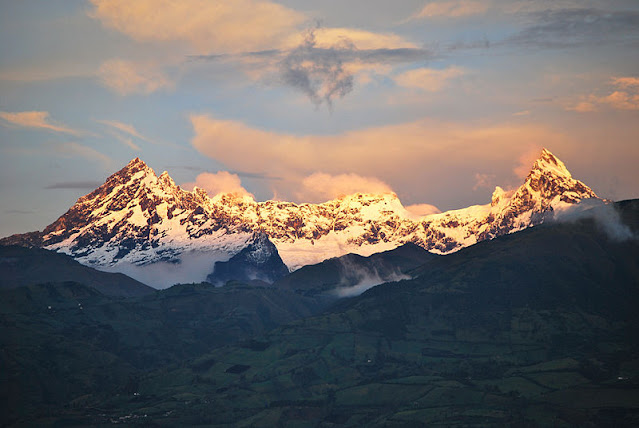 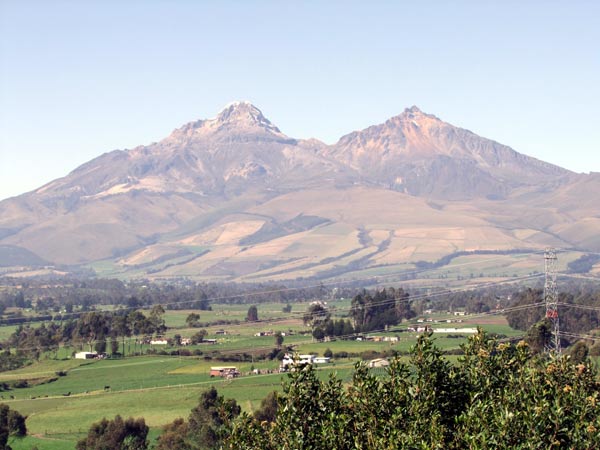 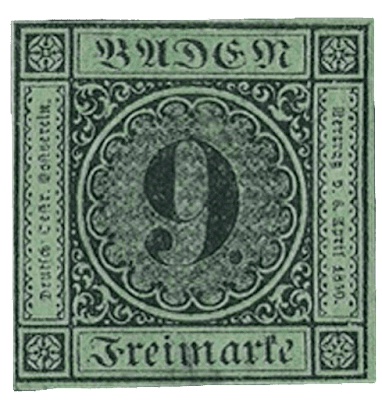 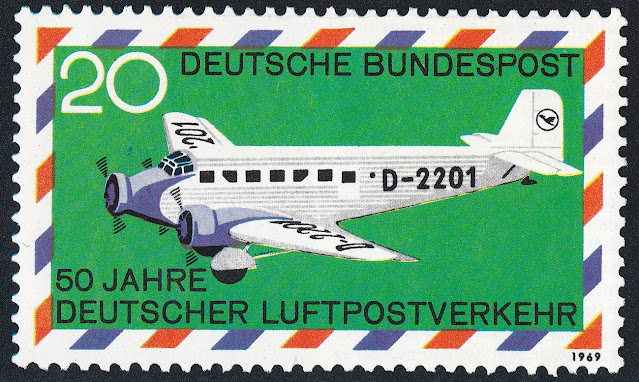 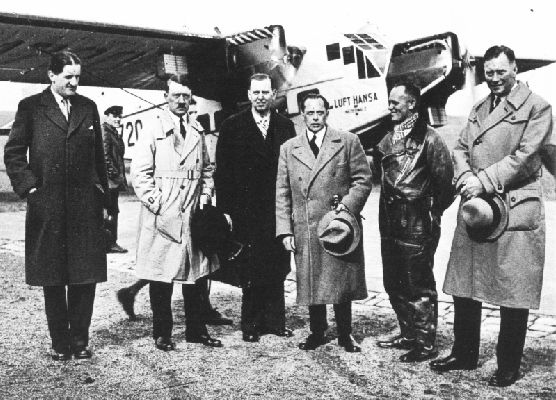 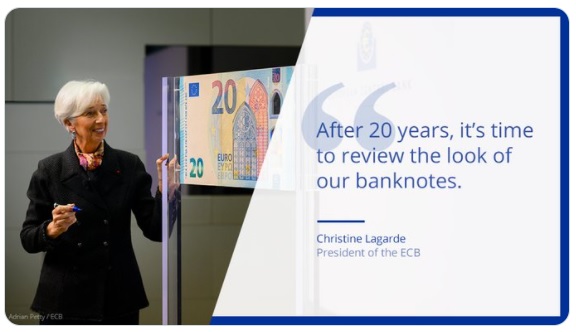 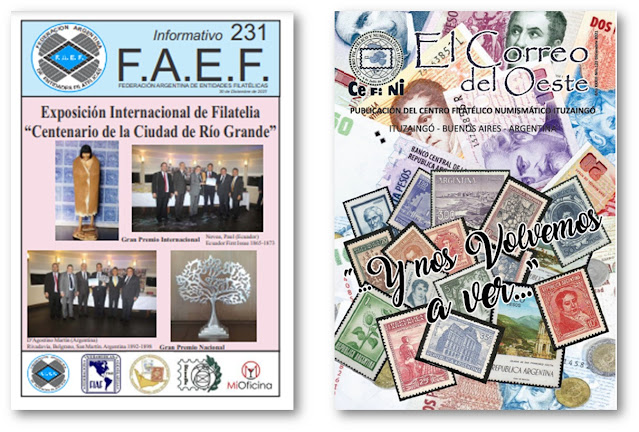 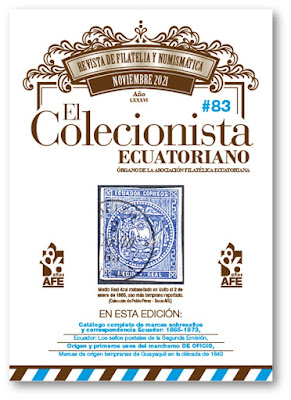 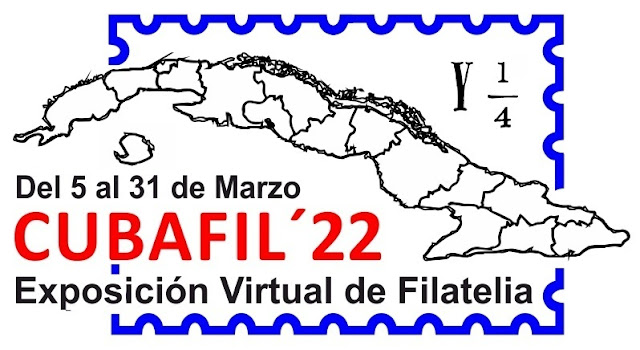 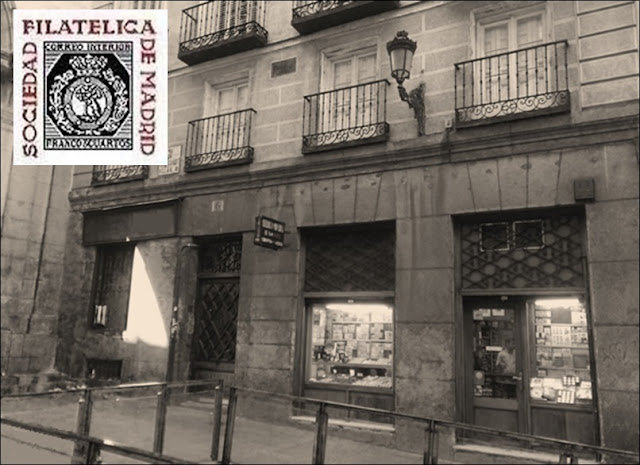 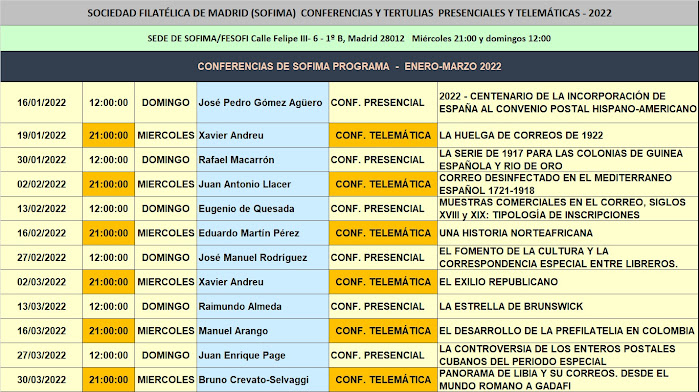 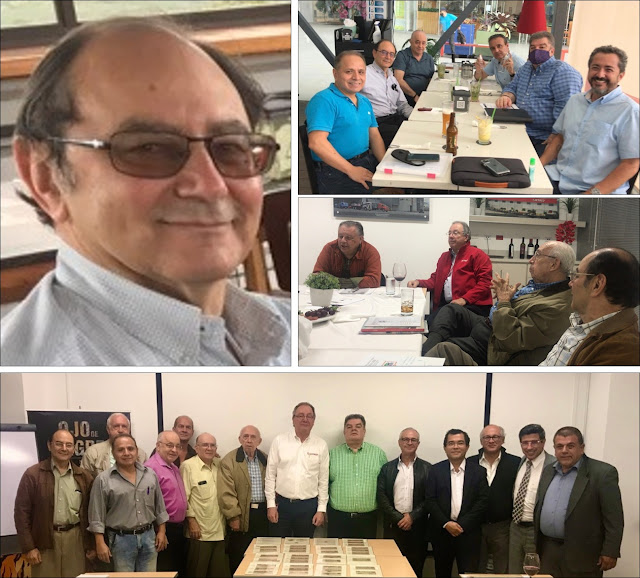 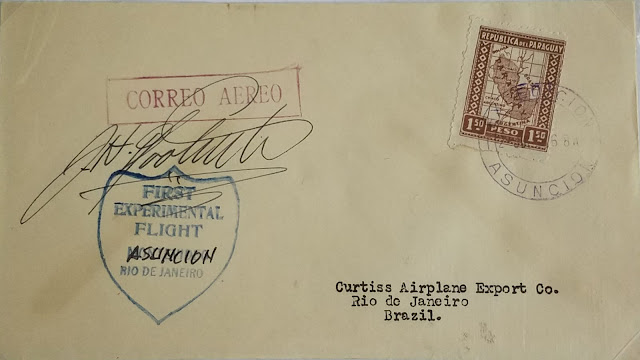 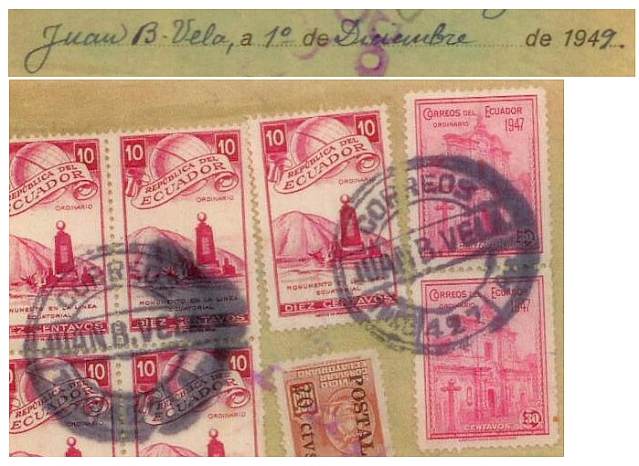 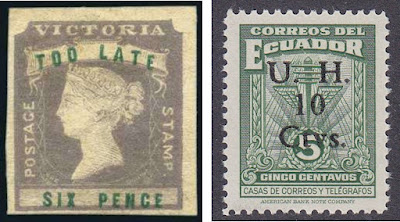 The "Fifth Period"begins with a new embossed Mexican postal stationery stamp, showing an Eagle with Snake in beak on Cactus. This new issue of the 5-centavos in shades of blues and yellow orange to orange and the 10-centavos in shades of lilac would be the lasta Mexican postal stationery issue used by Wells Fargo y cia. At this time, Wells Fargo y Cia. was the only major express company operating in Mexico and in January 1900 they had 223 offices and agents in Mexico. Of these, twenty-six were new and three offices or agents on the January 1899 list had been closed or withdrwn from the January 1900 list. This was typical of office and agent lists of Wells Fargo y cia. During the hext few years, Wells Fargo y cia would increase its office and agent lists to include towns and stations once supplied by the closed National and Hidalgo Express Companies as well as newly developing areas and railroad systems. Wells Fargo y Cia. was constantly on the move, opening new offices where the need created profit and closing offices that could not make money because of lack of customer use. It was becoming more and more difficult to show a profit in the express mail end of the business and the transportation of goods and bullion was becoming the main source or income for Wells Fargo y Cia.

The projected carnings of the railroads had not developed, and the Mexican government had not paid its subsidies in most cases for many years. They were becoming rundown from lack of maintenance and repair. President Díaz had been in power for over 30 years, and the Mexican government was beginning to stafnate under the old regime. The political bureaucracy was entrenched and bleeding too much of the government's revenues into their own pockets. Díaz education and land reforms for the working people had fallen by the wayside and civic improvements had been forgotten. The Mexican population was becoming dissatisfied and wanted change.

By January of  1909, there were 456 offices and agents and this is the last list of WFyC offices and agents I know of. On March 1, 1910, the WF Express office in New York U.S.A. printed a new Official Directory listing of 759 offices, agents and correspondents. In this directory, the name "Wells Fargo y Cia." would disappear and "Compañía Mexicana De Express, S.A." would take its place. This would enda WFyC express business in Mexico. At first, the new Compañía Mexicana De Expres S.A., started as a joint venture between Wells Fargo and the Mexican Postal Authorithy but with the nacionalization of the majority of the foreign owned railroads, Wells Fargo y Cia. was forced to gradually phase out the express mail business and the Mexican postal system became the sole carrier mail in Mexico - just in time for the Mexican Revolution.

Three of the Compañía Mexicana De Express S.A. covers and two post cards I have show the change over from Wells Fargo y Cia. The first is a sealed stock document envelope with "EXPRESS WELLS FARGO Y CIA" marked out and a handstamp above in violet reading "Compañía Mexicana de Express S.A.". There is a 5-centavos orange Eagle postage stamp canceled with a "CIA. MEXICANA DE EXPRESS S.A. / MEXICO D.D. / NOV 19 1909" oval handstamp in violet (Figure 8). The second is a WFyC cover (H&G#97a) with a Mexico D.F. round machine cancel in black on front and a red oval handstamp in the lower left corner reading "CIA. MEXICANA DE EXPRESS S.A. / MEXICO D.F. / DEPARTAMENTO DE TARIFAS / JUN 7 1910" (Figure 9). The third is a WFyC cover (H&G#98) with a Mexico D.F. round handstamp cancel in black dated "14 JUL 1910" and with a red oval handstsamp between the WFyC frank and the embossed 5-centavos yellow orange Eagle readin "CIA. MESICANA DE EXPRESS S.A. / MEXICO D.F. / DEPARTAMENTO DE COMPRAS Y ALMACEN" (Figure 10). The first post card is a 2-centavos green eagle (PC117) and is a pick-up notice from Gómez Palacio, Durango dated "DIC 7 1909" with an Agente "A.A. SORIANO" handstamp all in red and "COMPAÑIA MEXICANA DE EXPRES S.A." in violet at top, all on the back of post card (Figure 11) A.A. SORIANO was a route agent for Wells Fargo y cia. and became a route agent for Cia. Mexicana de Express S.A., while it was a joint venture. The second post card is a 1-centavo lilac Eagle (PC115) and is also a pick-up notice from Cananea, Sonora, dated "MAR 14 1910" (Figure 12). On the back there is a straight-line handstamp "EXPRESS WELLS FARGO Y CIA" at the top with a typical oval WFyC cancellation handstamp below, both in violet. These items indicate that the change from Wells Fargo y Cia. to Cia. Mexicana de Express S.A., started taking place late in 1909 and that the transition was still taking place in 1910. From this time on, all canceling devices used would be Mexican Post Office devices by Mexican postal employees on WF coverts, and the use of the "Wells Fargo y Cia. Express" frank would be discontinued, along with the use of Mexican postal stationery. The compañía Mexicana Express S.A., would not survive very long because of the Mexican Revolution and Wells Fargo would continue its operations in Mexico under the new title "Wells Fargo & Co. Express S.A." transporting goods and bullion throughout the Mexican Revolution. In later years it would develop tourist and travel departments before closing its doors in 1964 of its own accord.

This article starts before 1860 and ends after 1910, a period of over 50 years, and could not possibly cover all the circumstances and situations surrounding Wells Fargo and Wells Fargo y Cia. operations in Mexico. The content tries to convey, in general, the divisions of the issues (Periods of Operation) and what brought them about. Any and all comments will be greatly appreciated e-mail dextermattoon@hotmail.com.