THE FORWARDING AGENTS IN MEXICO (III)

The "Checklist of the Forwarding Agents in Mexico", below is far from complete. I hope to update it if new data comes to hand. There are common and rare markings, or very rare such as those of Bagdad and Matamoros in the state of Tamaulipas, across the Rio Grande; or those from Monterrey, capital of the state of Nuevo Leon. Rarity is not implied if a forwarder's mark is omitted from the list below. 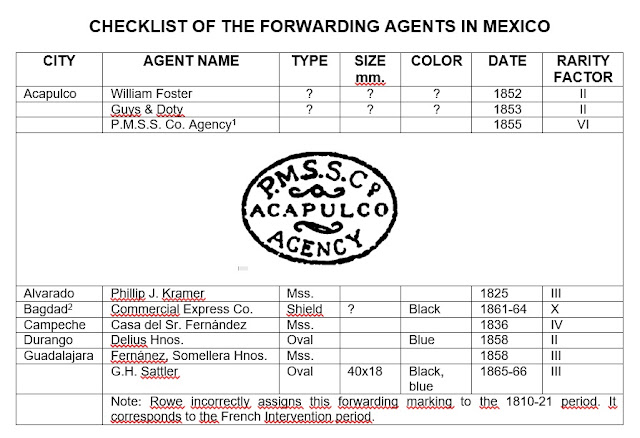 
[1] The Pacific Mail Steam Ship Co. operated a service from Panama to San Francisco in 1863 and had an agency at Acapulco. In 1866 the P.M.S.S. Montana maintened a service between Panama and San Francisco via Acapulco. There were three sailings a month, that on the 9th from Panam also stopping at Manzanillo.
[2] Bagdad was founded in 1863, 25 miles east of Matamoros. It prospered during the U.S. Civil War. Cotton production was very importante. It had more tan 6.000 inhabitants. On January 5, 1866 it was attacked by elements of the U.S. Army apparently without proper authority, annihilating the military garrison.
Publicado por Actualidad Filatélica en 12:55