THE FORWARDING AGENTS IN MEXICO (I) 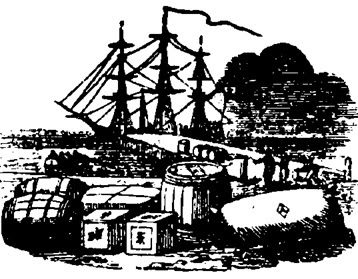 This is an attempt to gather together the information available regarding the Forwarding Agents or "Forwarders" who operated in Mexico in the 19th. century. Not much  has been written about this fascinating field of Mexican Philately. There exists the work of Kennet Rowe titled, The Postal History of Forwarding Agents, second edition updated, published in 1984 by Leonard H. Hartmann, of Lousville, Kentucky. Most of the information contained herewith has been taken from Rowe's book.

19th. century the existing postal systems were slow, inadequate and expensive. In many countries the safe delivery of mail was a matter of chance. Some of the larger firms made a practice of either sending one of their own men overseas to act as an agent, or of appointing someone on the spot to act for them, or actually set up branches in overseas ports to see to their interests and of course to forward both mail an goods. With these men the profession of ship broker, forwarding agent and commission merchant came into being.

Therefore, a forwarding agent is defined as "a person, or firm, who undertakes to see that the goods or correspondence of another are transported without himself acting as the carrier". This definition elininates the private carriers and the official services and it allows the inclusion of many small firms whose only forwarding function was in the postal sense.

In Mexico not anyone could act as a forwarding agent since most of the mail, both domestic and foreign, was that of businessmen or merchants. The official mail was handled differently. 19th. century most of the imported goods into Mexico came from France and England, obviously transported by ships of these two countries. Probably this also applied to the forwarders handling said imports. It should be noted that France and England signed a commercial treaty in 1860 for the protection and benefit of their industries, exports, markets, and so on.

In Mexico the work of a forwarding agent could be carried out by single individuals or firms with the right connections. These were merchants who had relations with other merchants for all kinds of businesses. Many of them acted as bankers. The ship's agents were merchants, too. Occasionally the ship's broker was the captain of the ship, who in turn had to deal with other merchants. Many different types of individuals and occupations were represented in the ranks of the forwarding agents: shipping agents, merchants, bankers brokers, consular officials, tavern keepers, and express companies.

During the last century ministers (ambassadors) as well as consuls in Mexico enjoyed such a power that one now can handly imagine. For instance, Louis Hargous was de United States Consul at the port of Veracruz. J. H. Parrot, of the firm Parrott and Company was de US Consul at the port of Mazatlan. The title of consul was that of heavy influence, both business and otherwise.

Most of the forwarding agents in Mexico Operated between the years 1810 and 1879. Their greatest activity was in the 1830's and 1850's, when the mining industry was at its peak. Accessibility was not the only factor which encouraged the use of private means to move mail. To reduce high postage rates to a minimum many firms made a practice of sending several letters under the same cover with a requiest that the recipient forward them to their various destinations. It is important to mention that the sender in Mexico had to pay for the forwarding charges of his mail at the consulate of the ship's nationality. It was assumed that the moment the mail was accepted by someone at the ship, (handed over to a consulate) they were kind of officially insured.

One of the usual reasons for forwarding was the interruptioin of normal communications by blockade or war. For instance, during the United States Civil War the Confederated made extensive use of a small vessel to run the blockade with needed supplies and small amounts of mail in both directions. Most of the agents who handled this trade were based in either the British West Indies or Mexico. Often business firms wrote their letters in duplicate or triplicate and sent them by different routes or xhips to ensure delivery. Obviously, those senders living near a seaport found it relatively easy to send letters. However, if one lived far from a port or if the port had no ship going to the required destination, some means had to be found to get the letter into the hands of a forwarding agent. The agent would then obliterate his own address and forward it to its destination.

An unscrupulous agent or ship's captain could conveniently "lose" letters entrusted to him while pocketing the fee. It is worthwhile mentioning that letters addressed to towns on the west coast of Mexico with the making, "VIA PANAMA" were handled by forwarders of that city. This service via Panama was very reliable. No lost or vanishing letters. They all arrived at their destinations.

One very importante roll played by the forwarders at Veracruz was the establishment of extraordinarios, and so it was the endorsement on the letter: "Por extraordinario del 'Tennessee .... etc.'", in time for the sailing of British or French ships.

The operation of the forwarding agents in Mexico came to an end for various reasons. Namely: 1. the opening of the railroad between the port of Veracruz and Mexico City in 1873. It is assumed that the post office entrusted the handling of the mails to the railroad. There were two travelling post offices, one from Veracruz to Maltrata (5880 feet above sea level), the other fron Maltrata to Mexico City. 2. the issuance of the Porte de Mar stamps simplified the matter for letters sent overseas. 3. Mexico's admission to the Universal Postal Union in 1879 ended the operations of the forwarders in Mexico.