ECUADOR: A SECOND TYPE OF THE 3 CENTAVOS ROCAFUERTE POSTAL STATIONERY

Upon multiple requests form our readers we are providing a translation into English of the article authored by Juan Pablo Aguilar which appeared in this blog dated November 11, 2018.

The two and three cent postal stationery cards (Maier PC12 and PC13) issued in 1894 were printed by the Hamilton Bank Note Company, and formed part of the Seebeck contract which was in effect between 1892 to 1896. Until now, two types of the two centavos card are known which was printed in brown on pink paper stock (Maier PC12 and PC 12a). Nothing, however, has been mentioned regarding the complimentary card of three centavos printed in blue on a clear violet paper stock.

We have just discovered a second type of the three centavos card, which shows three basic differences as detailed below. 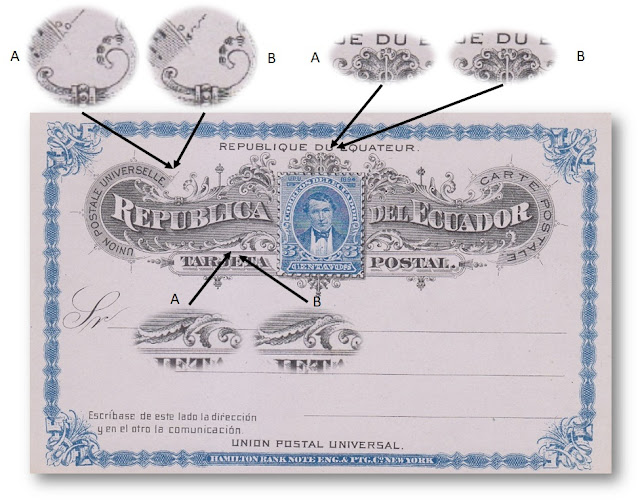 The first variety appears in a semi-circle to the left of the stamp depicting Rocafuerte where one finds the inscription “UNION POSTALE UNIVERSELLE” which is decorated with six rays that depart from a triangle formed by three circles.

In the one which we identify as type A, all rays are straight lines, and in the case of the sixth, if one counts from the bottom to the top, one of the circles of the base –on the right- appears incomplete. 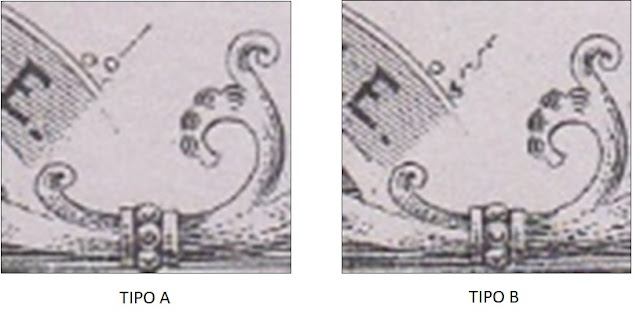 In the one, which we call type B, the sixth ray is a wavy line there appear the two circles of the base of the triangle but not the one of the superior vertex.

The border applied on the top of the stamp allows us to identify a second difference. In type A the adornment appears complete. In the type B the adornment on the upper left is cut.

A third difference appears on the lower left hand border, next to the stamp above the word “TARJETA”. In type A, to the left of the third scroll, from the right to the left, exists a blot which does not appear in type B.

On the material which we leave been able to study, the great majority of the type B cards circulated in 1895, although we have found one from 1894. This makes use believe that both types were printed at the same time.

Although it is necessary to study additional material to arrive at definitive conclusion we would like to comment that the specimen copies with “CANCELLED” stamp are from type A and those perforated with stars are from type B.

We await any contribution from our readers relating this discovery.

Thanks to Georg Maier and Teddy Suarez for their help.

When Juan Pablo discovered the differences in printing of the three centavos Rocafuerte card, the question arose whether we were dealing with two printings and which of the two was first or if we were dealing with a printing error. The material available to us provided as will the following conclusion.

Both types appeared in equal quantity and both were used commercially beginning 1894. When we speak of type A and B the arrangement is arbitrary as we don’t known which comes first.

Nor do we be know if we are dealing with two separate printings or if both types appear on the same plate.

What we can say from our observations is that we are not dealing here with printing errors but, rather, two different prints which appeared at the same time. Whether the two types appear on one or two different plates remains to be resolved.
Publicado por Actualidad Filatélica en 16:20