1817: GUAYAQUIL TO MADRID, VIA GUATEMALA

The Peru Postal district in 1779 included the territories that present day are Peru, Ecuador and part of Bolivia and Colombia. The red Peru mark was delivered to the post office in Guayaquil around the postmaster should apply the red PERU mark on all covers going to Spain, Europe. This letter was route for the Spanish mail because the south was in power of the independent Chileans and the route of Potosi, Argentina. According the written words “Antonio Perez y Treao captain el Cavalleria”. This letter carried by a Spanish military ship named “Pego Empada” to Guatemala. The route of letter is Guayaquil- Poerto de San Jose, Guatemala- Tuxtla- Veracruz, Mexico, La Habana, Cuba- Cadiz or La Coruna- Madrid, Spain. The rate was 40 1/2 reales, weight 2 1/4oz, paid in Guayaquil for 18 reales for one ounce. Struck in transit with FRANCO EN GUATEMALA postmark, Endorsed “Por Pego Empada” at lower left, means carriage of this letter. The “X” indicates no postage due in Madrid. 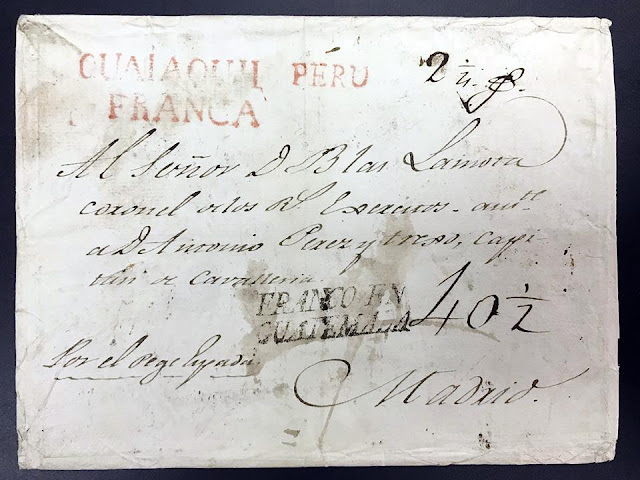 This letter maybe one of two recorded covers with this black FRANCA EN GUATEMALA transit mark, from Guayaquil to Spain, the other is in the James Mazepa’s collection “Colonial Central American”. One of three covers recorded with red Guayaquil Franca / Peru marks, paid by sender, the other in James Mazepa collection also, the third in Geoffrey Lewis’s collection of “Stampless mail from Spanish colonies to Spain ”.
Publicado por Actualidad Filatélica en 17:24